The entire Mombasa city was brought to a standstill as armed officers were deployed to beef up security in the town that at some point was a center of terrorist attack threats.

READ ALSO: Eliud Kipchoge lost for words as Kenyans line up to congratulate him during Mashujaa Day

As dance and speeches were going on at the park, somewhere some Kenyans were going through hell in the hands of the armed forces, according to a report by The Standard.

In Senti Kumi, Majengo Mapya and Dudus areas of Likoni, many residents remained indoors afraid of the military presence and masked soldiers.

The contingent of security officers were deployed to control traffic into the venue and also avert an impending protest that had been planned by truck drivers who had plans to disrupt the event.

Locals who were heading to the venue were accosted by rogue soldiers and police officers who harassed them and even forced them to swim in sewage for no reason.

One Mwangole Chikore who spoke to the media alleged he was accosted and forced to swim inside a sewer for more than ten minutes oblivious of the cold and discomfort that comes with sewer line.

The 23-year-old businessman at Mwembe Tayari disclosed he was on his way to the venue when the law enforcers stopped him and demanded to know why he looked suspicious.

“They wrestled me to the ground and later forced me to swim inside a filthy sewage. I tried to run but they hit me with the gun,” said a tearful Chikore.

Moses Juma was on his way from Likoni to Mama Ngina Park to attend the event and when he reached at the ferry point he found the officers had taken over all the routes and were not allowing anybody to pass through. 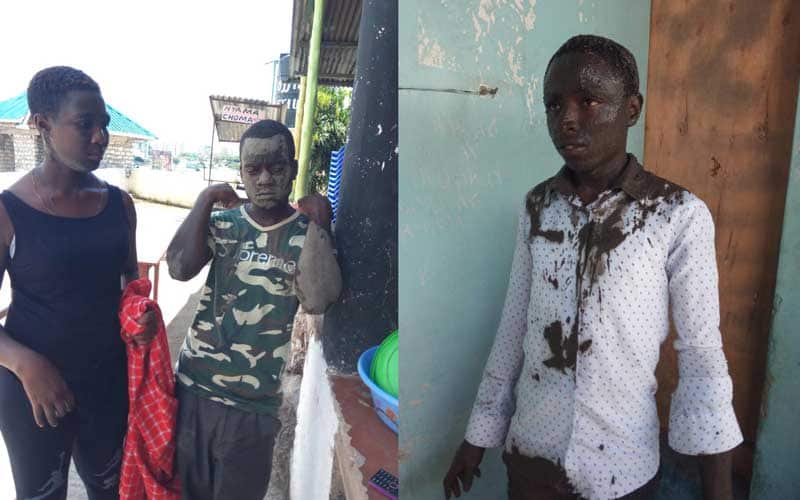 Left: Moses Juma and a female companion after being brutalised by soldiers. Right: Maxwell Shiheho a victim of military abuse. Photo: The Standard
Source: UGC

“They rained slaps on me while hitting me with the gun. They later forced me and my girlfriend to sit on a sewer,” a shaking Juma said.

Salim Matano was forced to do ten press ups in the sewer while singing the national anthem.

After doing five of them he fell down.

The officers pounced on him with beatings as others searched through his pockets and made away with KSh 350.

“This is needless terror. Anyway, I blame myself for trying to attend the Mashujaa Day celebrations. If I had stayed at home, I could not have been forced to drink from a sewer,” Matano said.

Maxwell Shiheho said armed soldiers forced him to remove all clothes and swim in a sewer as they watched and mocked him.

Security agents are yet to comment on the matter.

Do you have a groundbreaking story you would like us to publish? Please reach us through news@tuko.co.ke or WhatsApp: 0732482690. Contact Tuko.co.ke instantly